Good morning and happy Saturday! A couple of weeks ago, I said I would have more to say on my experience with the Albany Gay Men’s Chorus, and here it is. Please bear with me as this will be one of my lengthier blog posts. 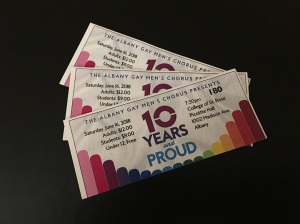 Back in January the Albany Gay Men’s Chorus had a “meet & greet” event that I attended which was aimed at guys who were interested in joining the chorus. To be completely honest, I wasn’t entirely sure that singing in a group (or at all, for that matter) was something I would be capable of. Like most people, I sing along to what I listen to in the car, but I know I do it badly, and I have heard the chorus perform at several concerts, so I couldn’t imagine my voice being much of a contribution. At least not a good contribution.

I had no idea what the try-out/audition process the following week would be like, but as it turns out, it was very easy. The chorus conductor put each new person through a series of very easy exercises that helped him determine which section they are best suited for. I landed in the bass section with my brother Steven, and immediately after all the new people were placed, packets of sheet music were handed out and we dove right into rehearsing a few of the songs that were chosen for the spring concert.

It is at this point that I swear I must have looked like a deer in the headlights. I do not read music. I am aware of what sheet music is, and that the symbols on the lines are musical notes, but I couldn’t tell you which symbol on which line is which note, nor could I tell you what that note is supposed to sound like. I was a complete beginner, but I was determined to try, and I stuck with it. 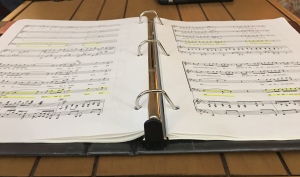 The first real music reading skill I had to get familiar with is which one of those lines of notes on our sheet music pertained to the part that the section I am in is supposed to sing. Learning to visually block out everything but that (except for when I need to know what the other sections are supposed to be doing) took some time, but like anything new, you really do get better with practice. Can I tell you today which symbols on which line are which note? Nope. But I am smart, and I am observant, and I paid attention to how the guys in my section sounded as they sang some of the lines, and that gave me a good idea of what I need to try and match. I also bought myself a reasonably priced electronic keyboard with cheater stickers on the keys to use while practicing at home to help me identify notes when I need to be reminded of what they should sound like.

To borrow a phrase from a dear friend, I am on chapter 3 while everyone else is on chapter 30, but I am grateful that I took this chance and opened the book. Today I am looking back on all the work we have put in over the last six months, and although I will still claim to be a complete beginner, I know that isn’t entirely true now. I am amazed at how far I’ve come and how much I have learned. It is impossible to go through one rehearsal session without learning something, let alone an entire season preparing for a concert. Our conductor and accompanist, both of whom are music teachers (and damn good ones) make sure of that. But they go beyond just teaching us how to perform our parts for any given arrangement. They make learning our parts fun. Without that, being a member of this chorus would not be anywhere near as enjoyable as it is.

During the time that my brother has been in the chorus I have become friends with many other guys in the chorus. Now, as a chorus member myself, I consider every single one of these guys that I’m going to be standing on that stage with tonight a friend and in some sense, a brother too. In some way, some how, everyone in this chorus has given me support and encouragement, and made me feel like I belong there.

So, there you have it. Musically inept little old me is not as musically inept as I was six months ago, and tonight I will be signing on a stage with the Albany Gay Men’s Chorus. The past six months has been a very rewarding and enriching experience, as learning something new and challenging yourself should be. I am looking forward to continuing that experience when we start up rehearsals again in August for our winter concert.

Which reminds me, there will be another meet and greet session and try-outs in August too. I believe it will be the 19th. If you’re like me and think you can’t sing, that you don’t know how to read music, or for whatever reason have doubts that you have something worthwhile to contribute to the chorus, think again. You’ll never know until you try. As adults, we don’t often allow ourselves to be new at something and we judge ourselves too harshly if we don’t immediately grasp whatever new thing it is that we set out to do. But if you can allow yourself the freedom to be new at something and to learn and grow, you’re likely going to have as much fun being a part of the Albany Gay Men’s Chorus as I have.

Before I close, I do want to add something fiber related to this post. To help me along outside of our rehearsal sessions, I have recorded every single rehearsal I have been able to attend (which is all but one) so that I can listen along in my own time and rehearse more at home. A lot of this work was done while sitting at a spinning wheel. While the rehearsal recording played back, my feet were busy treadling the wheel, my hands were busy drafting fiber, my eyes were on my sheet music which was placed conveniently on a music stand next to my wheel, and my brain was absorbing it all. Throughout all my rehearsing at home over the last six months, I have spun close to four pounds of fiber. Some of it has been given away to friends, but here is everything I still have for myself. That’s a pretty big boost to my hand spun stash and I am really looking forward to working with it all.

That’s it for today. I hope you have a great weekend, and hope you can come see the Albany Gay Men’s Chorus perform tonight. We have worked so hard on this concert, and we are all very proud to stand up and sing for you tonight.

2 thoughts on “Tonight’s the Night!”