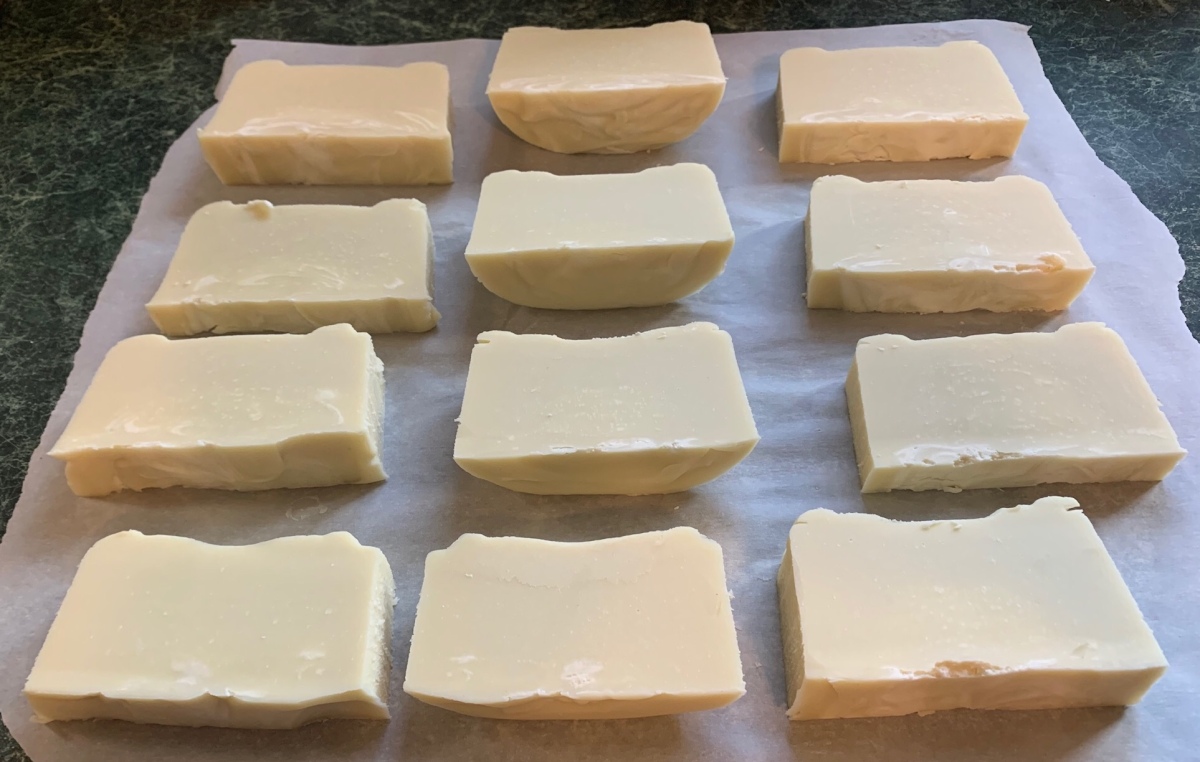 It has been years since I have used any of the big name soaps you see on the shelves in the store. Or maybe you don’t see them right now because they are probably selling out now too.

One of the first things I buy at any fiber festival is handmade soap and there are several independent, small scale producers whose soaps I can never resist. If you are familiar with what handmade soaps cost then you’re probably already thinking about how expensive that can be, especially if that’s what I use all the time and it would be.

I will admit that I do supplement my handmade soap purchases with a more affordable commercially produced soap but I will stick to ones that are more naturally/ethically produced and preferably as locally produced as possible.

Something I kind of unexpectedly fell in love with the first time I tried it was making my own soap with lye, a blend of different vegetable based oils, and various citrus scented essential oils. That was a couple or three years ago and all that soap that I made then has long since been used up. So this past Christmas, Michael got me what might seem like odd presents. Four pounds of lye, a couple pounds of palm kernel flakes, and a set of woodsy scented essential oils.

I am a big fan of woodsy scents, especially balsam. It reminds me of all of the family camping trips in The Adirondacks when I was growing up.

One weekend just after Christmas when the dogs were soundly back to sleep after breakfast, I decided it was time to make a batch of soap or two. I had written up a couple of test recipes to try, using different percentages of palm kernel, olive, coconut, and soybean oils. I based these recipes on what properties the various oils add to the soap, and had to also adjust the amount of lye based on the percentage of each oil.

I used some lemon and lemongrass left over from that selection of citrus scents in the soap kit for my first batch, and the bottle of “Thuja” from my new set of essential oils for the second batch. It is very woodsy, and I would say it is more earth and wood than the bottle in the kit called Earth And Wood. That one is actually patchouli and as much as I despise that scent, I was happy to use that for another batch of soap for a friend who does like the scent, rather than throw it in the trash is where I would usually say is the only place patchouli belongs.

The molds I used for my first two test recipes were inexpensive food storage containers. They make for oddly shaped bars but in a pinch, they’ll, do just fine. You can’t use them for food storage anymore though, so I have to keep the containers with my soap supplies. By the time I made the patchouli batch, I had received the inexpensive but well made soap molds I ordered. They are simple wooden boxes with a removable silicone lining and they make for great uniformly shaped bars.

Also in the batch of oil blends for the patchouli soap is a little bit of lanolin that I ordered specifically for soap making. Yep, a whole pound of sticky and stinky wool grease. I know I said I despise patchouli, but I will still keep a bar of this to use for myself so I can judge my recipe and consider different oil percentages based on how this batch feels. I might also wait until summertime to do that as patchouli is supposed to have a bug repellent effect. We will see.

That’s all I have today. I am off to shower, dress, and stay in today. Not that I am afraid of going out in the world right now, I just have no need to today. But if you are going out anywhere, take care of yourselves and take care of others at the same time and WASH YOUR HANDS!

2 thoughts on “I Love Soap”