Good morning and happy Saturday! It has been the perfect summer for having a pool. It has also been the perfect summer for doing very little knitting, and I know it has been at least a couple of months since I have done any serious spinning. Yes, Jade is the reason for that and not entirely because her crate is in my craft room. I have been through shenanigans with mischievous pharaoh hounds and Italian greyhounds before so I do my best to protect my stuff. Even when I think I’m keeping the dogs well supervised too, a split second is all it takes to undo a lot of hard work. 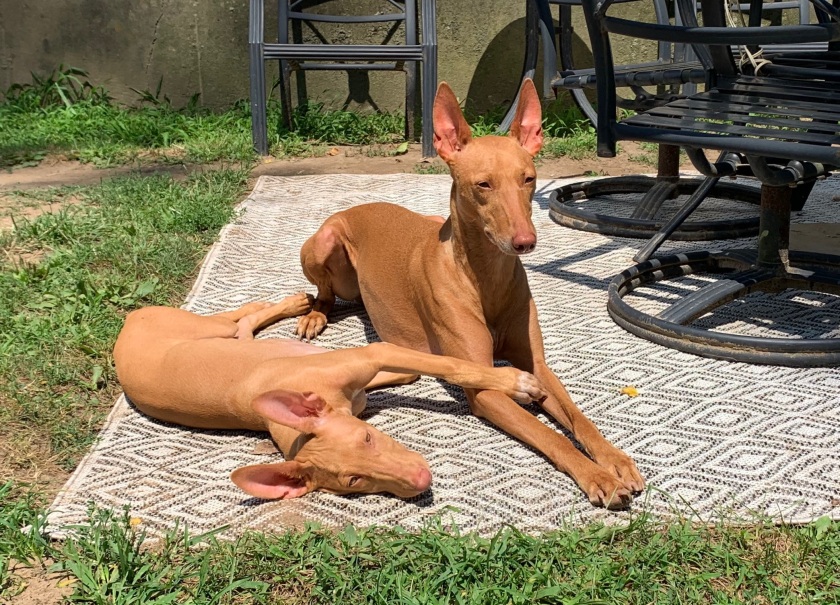 I have known since February that a puppy was coming, and made sure not to start anything new beyond what I had already committed to. I knew what my time would be spent doing and I am happy to do it. When Jade is sleeping there is so much stuff to catch up on around the house because when she’s awake she occupies all of your attention and almost all of your time too. She is starting to learn that when I am in the kitchen she shit out of luck when it comes to handouts and that is good! When Michael is is the kitchen, well…

Last Friday night we had dinner with a friend who hadn’t met Jade yet, and meeting as many new people and new dogs as possible is important for a puppy at this stage. He asked my advice on sewing machines and described some of the house related projects he was thinking of tackling. He left that evening with a sewing machine.

There was a time when I had more sewing machines than spinning wheels but I haven’t been able to say that in quite some time. This basic Kenmore was given to me by a friend probably ten years or so ago, and it was given to her by her mother in law a number of years before that. It is a great little workhorse and an easy to learn machine.

The advice I gave him is the same advice I give to new spinners about the wheels they are learning on. Consider what your wheel is and isn’t capable of doing efficiently for you and your needs as your skills develop, and evaluate what you think will along with any number of other factors like style, cost, and most important, a good fit for you physically. Thoroughly test driving a spinning wheel if you can is highly recommended.

I gave our friend the same advice with this sewing machine. Use it, learn from it, and think about what features you may want that this doesn’t have, if any. He has his eye on a couple of models that I would quite like having as well, but there’s no rush to return this machine. If it meets what he needs for what he wants to do, he can keep it as long as he likes. It has served me well just as it has served my friend before me, and her mother in law before that.

Also, it’s out of my house. Specifically my craft room.

Another reason I haven’t started any new knitting or spinning projects is also because my craft room is in a state of quite constant disarray since Jade’s arrival and her crate’s occupancy in that space. I am questioning the need for the White Co. sewing machine table that my drum carder sits on. I have never used this machine. It appears to be maybe 1960’s, electric. I have no idea when it was last used and quite frankly, I wouldn’t want to plug it in and find out. It has always been just a handy work surface for me. 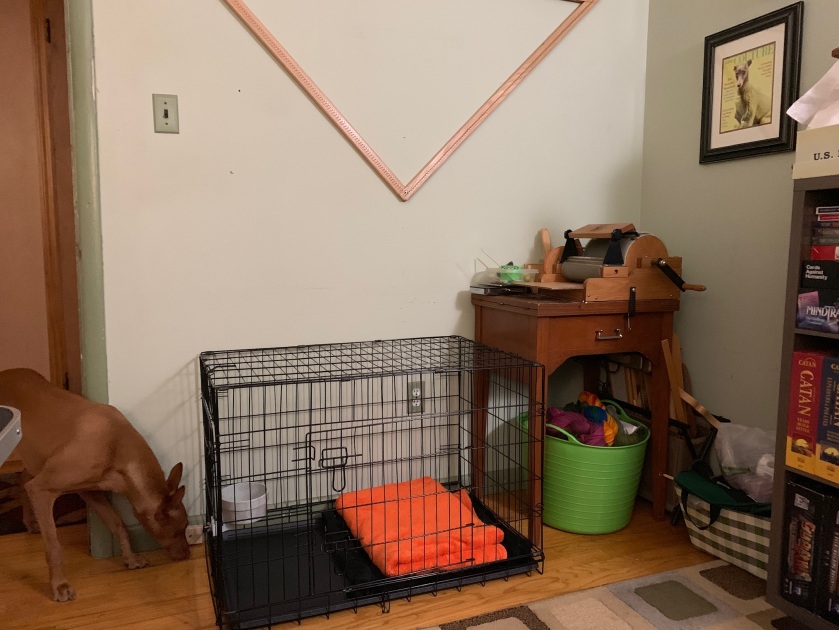 My thought is to build a bench along this wall that the largest size crate Jade will need can fit nicely underneath, and would solve an immense amount of work surface and storage issues. I have all of the materials in the basement leftover from other projects, and the tools to do it as well. It’s ambitious, I know.

That’s all for this morning. Today’s weather determines whether or not a lot of things on my to-do list get done. I have neglected a lot of outside yard maintenance because of the heat and being wet will prevent me from getting any of it done today.

2 thoughts on “Paying it forward/enabling”