Good morning and happy Saturday! Last weekend fiber artists from all over converged on one tiny little upstate town for the New York State Sheep and Wool Festival, and it has a history of being quite the mob scene. This year was no exception. Each year it seems like more and more festival goers race each other to queue up at vendor booths (after standing in queues at the gate just to get in) to get the same stuff they can most likely get from the same vendor online at the same price, and without so much extra hassle. Yes, some vendors at Rhinebeck have special prices on some products for that show, or have some products that might be in limited supply. What is it about those details that turns an ordinarily sedate knitter into a rabid fiber fiend? I have never wanted yarn or fiber so badly that I would subject myself to the kind of craziness that seems to be getting worse every year.

In past years, these lines of people would form inside the buildings, ultimately blocking access to other vendors. Many of these vendors complained, and rightfully so. It is a difficult festival to get into as a vendor, and it takes a lot of work to prepare stock and set up a booth. Imagine going through all of that just to have your booth blocked of by hordes of people wanting to spend their money somewhere else. This practice does seem to have stopped a couple of years ago, and the queues for those few vendors that everybody absolutely MUST get something from form outside the buildings. Now, instead of blocking off other vendors’ booths, they end up blocking access to the building itself.

I don’t even buy that much yarn and fiber at this event anymore, and when I do, it is always from the same small handful of vendors. I do spend a lot of time looking for tools, books, and other accessories that can help me make more use of the yarn and fiber I currently have, but honestly, the New York State Sheep and Wool Festival has become more of a social event for me, and I hear the same thing from a lot of people. 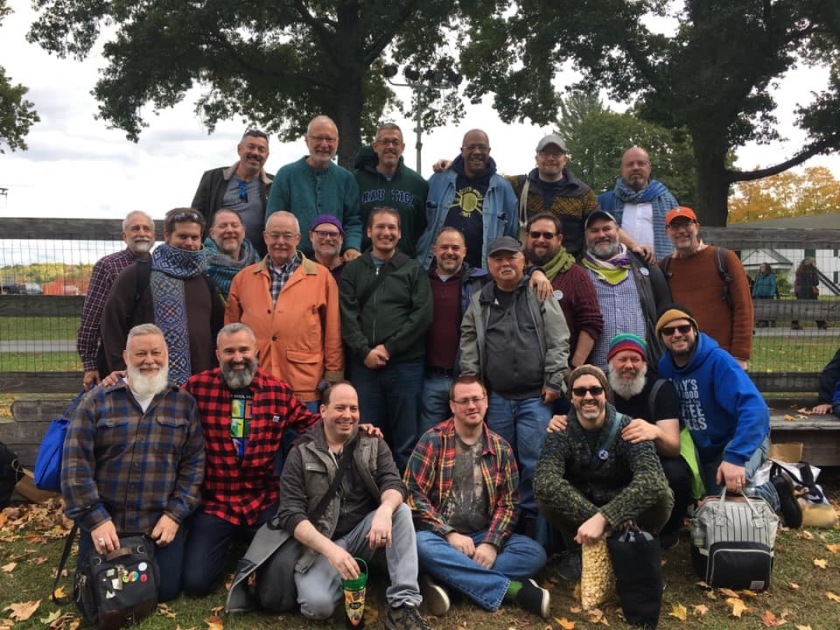 As I have done for the past several years, I organize a little Men’s Knitting Retreat meet-up on Saturday during the general Ravelry meet-up to provide information about upcoming retreats including costs, and when registration opens. While these meet-ups have mostly been a gathering of retreat veterans, we do get a few new guys who have never been to a men’s knitting retreat before, and come looking for more information. Guys who have been to these retreats before are happy to talk about the retreats they have been to and share their experiences, and it brings me great joy seeing men bond over their love of fiber arts.

This year, I was only able to attend on Saturday, so I had to make good use of what little shopping time I had after the meet-up. There were two vendors that I absolutely had to pay a visit to. The first was Dan Tracy Designs. Dan is a talented woodworker and he makes an impressive variety of spindles, darning eggs, nalbinding and darning needles, crochet hooks, and more. I had just visited him at the Adirondack Wool and Arts Festival a few weeks before. I will have more to say about what I purchased from him then, as it is so amazingly awesome (at least to me) that it deserves its own blog post. 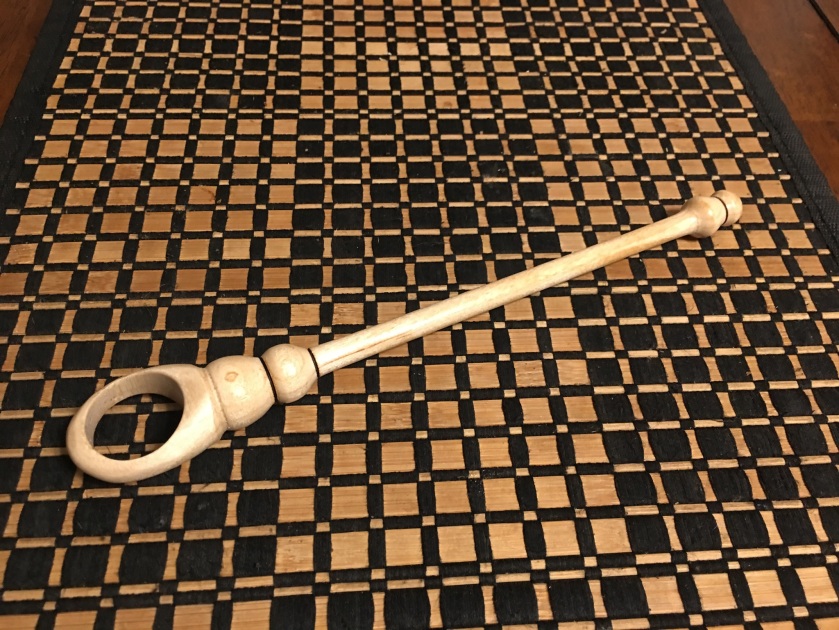 On this visit, I was interested in one thing. A ring distaff. I have been an avid user of several different types of wrist distaffs for quite some time now. After seeing these rings distaffs in his booth last month, I was quite intrigued by them so I did a little bit of searching the internet for more information, and after trying one in Dan’s booth last Saturday, I was sold. Or rather, a ring distaff was sold. To me! 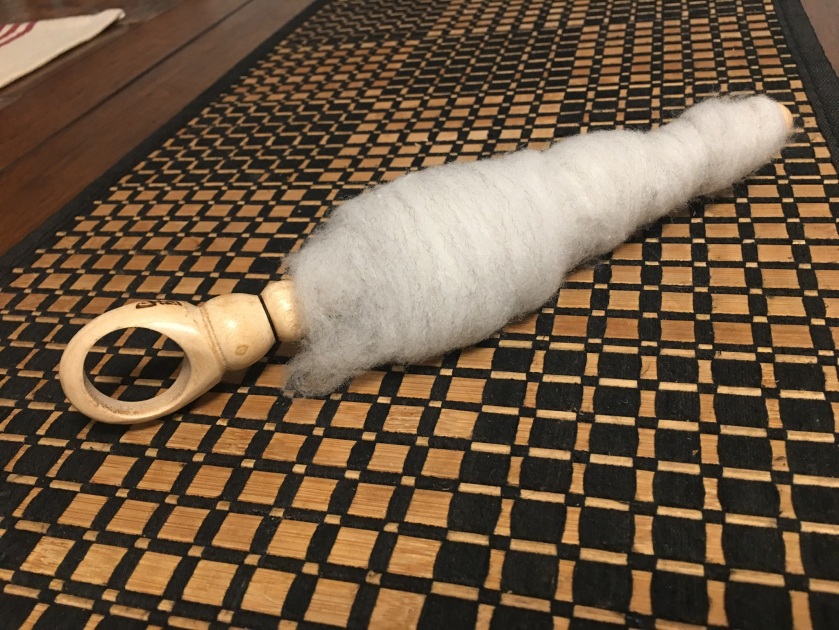 Having seen only a few pictures of how one is used, I was concerned that it would be uncomfortable or too cumbersome for my hands to deal with. What convinced me was that it was neither of these. In fact, I think I now like it more than a wrist distaff. Sure, a wrist distaff is handy, but as it dangles from your wrist as you spin, it can swing around and the yarn you’re spinning can very easily get caught up in it in the same way it can get caught up in a length of fiber that may be hanging down from your hands as you spin. Not so with the ring distaff. The fiber sits nicely out of the way above your “upper” hand when using a drop spindle, and when properly wrapped around the distaff, a length of roving can feed off and into your hands quite easily. 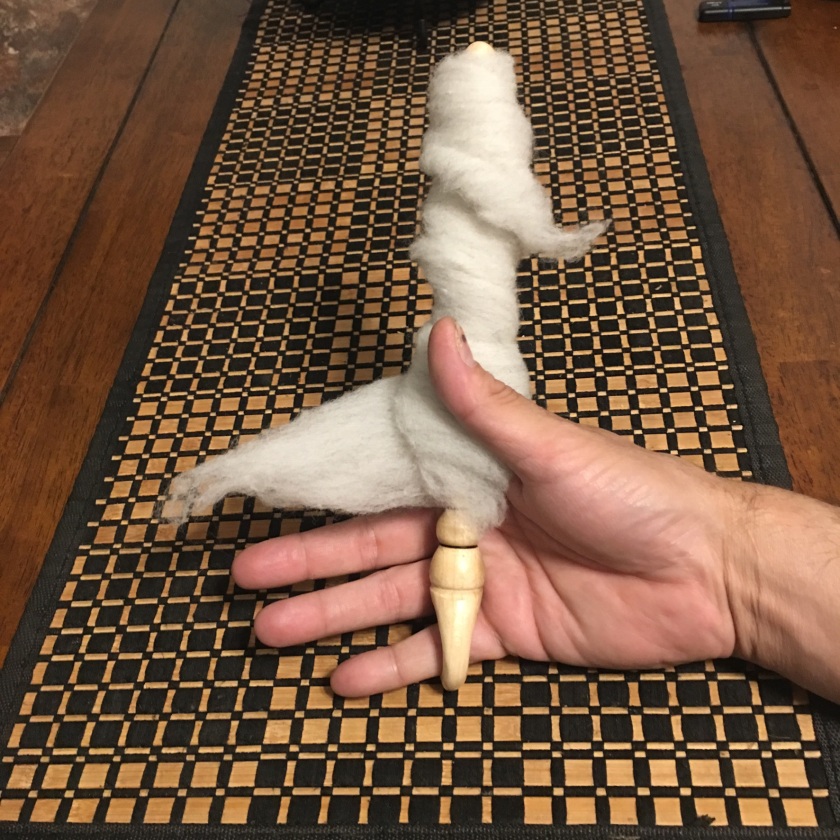 Dan also has a variety of other distaffs geared towards spindle spinning. These are much larger, with some resembling the “bird cage” type commonly seen on flax wheels, and are commonly held under the arm against your side. These do look a little more cumbersome to me, and seem like too much to carry or manage while spinning, but as my experience with the ring distaff has taught me, I’d have to try to be sure.

Rounding out the rest of my meager Rhinebeck haul are: 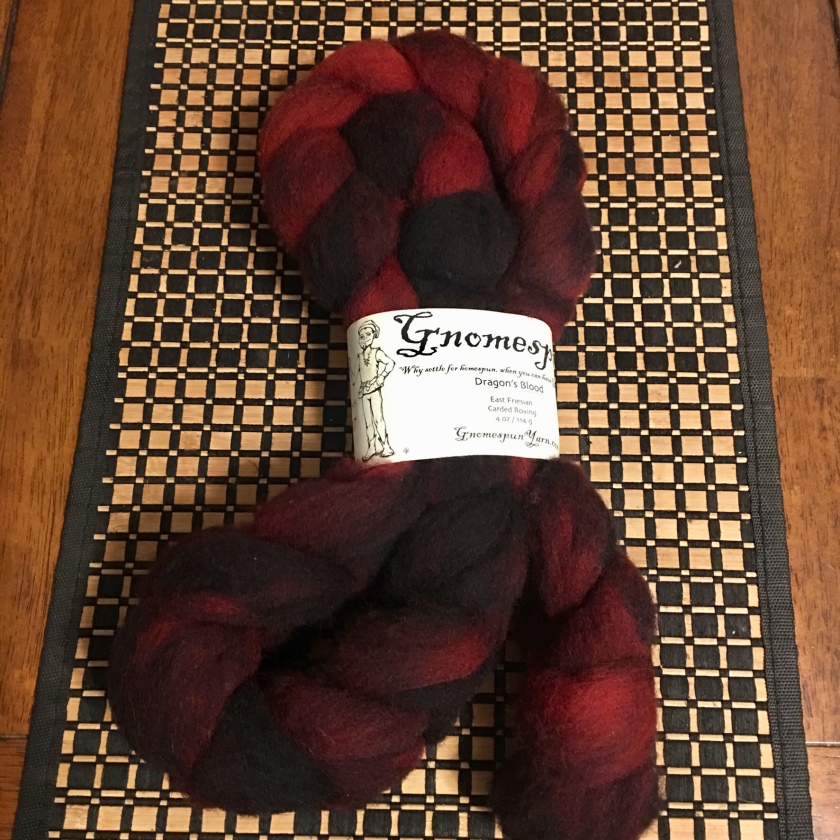 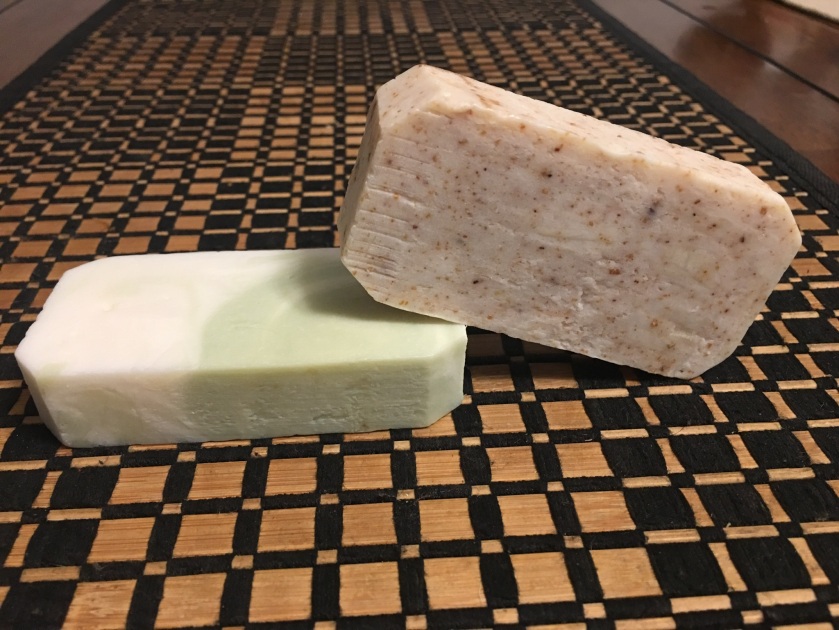 SOAP! For once this wasn’t my first purchase at a fiber festival! 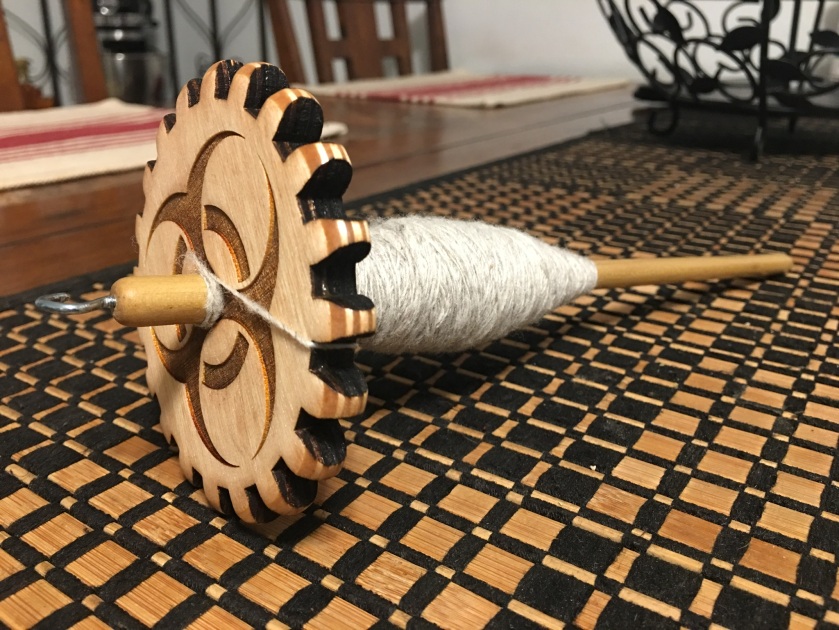 A new drop spindle from Scott Snyder of Snyder Spindles 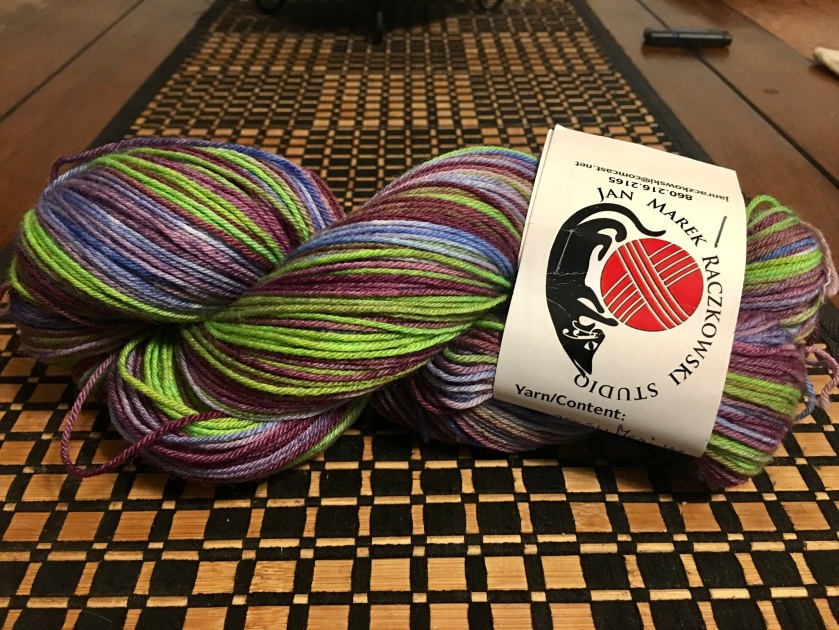 That’s it for my purchases. Yep, I came home with Rhinebeck money that I didn’t spend, but I did put it all to use the next day buying myself some badly needed new shirts for work.

That’s also it for this post. As I mentioned earlier, I will have more to say next week about one of my purchases at the Adirondack Wool and Arts Festival, so until then, have a