Good morning and happy Saturday! Did you get a snow day yesterday? I did not, and spent the entire day at work which was kind of weird. Michael had a snow day and because he was home all day, I did not have to come home at lunch time. Not that I couldn’t have. Most of the major roads were actually fine during that storm and were not much more than mildly slushy. Even our neighborhood, which I swear is always the last three streets in the town of Colonie to get cleared after any snowfall, had seen the plow come through just one time before 10 AM and was still easily navigable by the time I got home at the end of the day.

I could have taken advantage of having a snow day, too. Spring is coming, and spring cleaning is on my mind. My craft room has been getting a lot of attention this last week or so. Things that don’t often get moved have been moved and cleaned behind and/or under. Accumulated papers, mail, and other clutter has been sorted and put away properly; and even my stash has seen some thinning out as I have sorted through it and either de-stashed some items to friends, or added them to a box of stuff to donate to the sale table at the Men’s Spring Knitting Retreat. 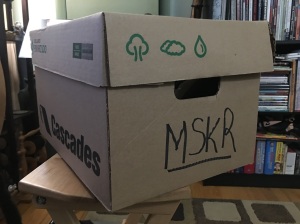 The biggest spring cleaning project is going to be the basement. It is unfinished but usable space that over the last few years (and mostly the last two) is looking more like it should be featured on an episode of Hoarders. Some of this stuff is our own. Some belongs to friends or family and is supposed to be here only temporarily, but we all know how that usually goes. Of the stuff that does belong to us, I am starting to think that very little is really necessary for us to keep. This picture was from a year ago. I am too embarrassed to show you what it looks like now.

Two floor looms and two great wheels reside in the basement as there is very little space upstairs for them, and I would like to clear out enough stuff in the basement so that I have space to set them up and use them. The looms are ideal for weaving blankets or rugs, and it’s weaving rag rugs that has really piqued my interest. So much so that I have been saving old sheets, towels, jeans, and other fabric items to be cut up into strips for making rag rugs. That will never happen until I tackle the issue of getting rid of as much stuff as I can.

So my plan for this weekend is to spend several hours both today and tomorrow sorting and organizing, and then make a plan to get rid the junk. I am hoping that we have enough stuff to make having a yard sale later in the spring worthwhile. Michael would rather see it all taken to the Salvation Army or Goodwill. But our trash could be someone else’s treasure, and a little extra spending money is never a bad thing.

That’s all for this morning. I am off to find some breakfast and then spin for a bit. When the rest of the house wakes up I will find my way downstairs to start my big spring cleaning project.

One thought on “Spring Cleaning”