How did you do in the Tour de Fleece? I managed to finish all of my spinning and even started plying my Razzle Berries before the start of last weekend. It’s a good thing we were given a little extra time after the tour was over to finish up our plying too, as I was away last weekend, but more about that later.

My Razzle Berries merino and silk blend became a 2 ply yarn measuring 714 yards and weighing 3.5 ounces. There was about half an ounce of “plying waste” which is what I end up winding off one of the storage bobbins to keep the color sections as lined up as possible. Sometimes I save what I remove and wind it onto another small storage bobbin. These get added to a collection of other miscellaneous leftovers from other spinning projects for making “crazy skens.” I didn’t do that this time, though. My collection of leftovers has grown large enough.

My baby camel that I had been spinning on my Russian and Tibetan style spindles became a 3 ply yarn measuring 94 yards and weighing in at a whopping 5/8ths of an ounce. It joins a skein of previously spun baby camel that I had plied before starting my TDF plying. This is really lovely stuff, and I have a bunch more of it to spin.

We did do a LOT of walking around Provincetown both days checking out various shops and galleries. It felt much different than the last time we were there 19 years ago.

It wasn’t as crowded, and the crowds that were there were much more mixed than I remember from our previous visit. It could have just been the timing of our visit, but I have heard other people say the same thing about Provincetown in general. 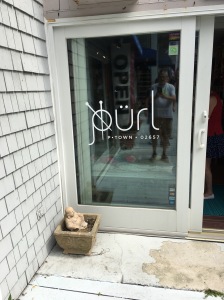 One new shop that opened up last year that I was excited to visit is Purl a lovely little yarn shop owned by Ryan Cooke who I had the pleasure of meeting last year at our Men’s Spring Knitting Retreat. This is a small shop but they have a great selection of yarn, needles, and notions. Some of the yarn is produced by local (local-ish, as it is the tip of the Cape) farms and indie dyers. As always, I was way too busy feeling everything to take any pictures beyond the one of the storefront. You can see more pictures of the shop on their Facebook page.

I am never one to walk out of a yarn shop without buying something, and whenever I am in a shop I haven’t been to before, I always look for the stuff I don’t see in my local shops. Purl is full of stuff I haven’t seen before, so it was tough to decide. Ultimately, I settled on two 615 yard skeins of worsted weight Targhee yarn from Dirty Water Dyeworks , and a Purl t-shirt.

That’s all this morning. We have a busy day ahead of us with lots to do, including taking two pharaoh hounds to the groomer. We have a weekend house guest who has gotten a little dirty since she’s been here, especially in the ears, so she will accompany Halo on her weekly pawdicure visit later this morning.

One thought on “TDF results and fiber Trekking in Provincetown”