I want so badly to say happy Saturday. I really do. But that is not happening today.

We woke up on Wednesday morning to the reality that hate, bigotry, misogyny, and xenophobia were voted into the White House. The candidate who encouraged his supporters to act with violence towards protesters during his campaign, who called an entire nation of people murderers and rapists, who wants to put Americans under surveillance because they are Muslim, and who thinks it’s perfectly okay to sexually assault women is now the face of this nation. It didn’t take long before his supporters, emboldened by the election, to act out their hate. In the last several days we have seen young Hispanic students taunted by their classmates and threatened with deportation, increased violence against Muslims, against gays, lesbians, and transgender people, and violence and blatant racism towards people of every color. Sure, horrible acts like this have been happening since long before the election, but so many of these incidents in the last few days have happened BECAUSE of the election. 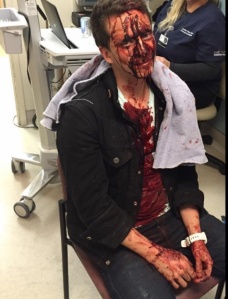 This violence is being committed because we have an incoming president who personifies this kind of behavior, and an electorate who put him there who finds it acceptable. That’s right. Every person who voted for Trump voted for everything we are seeing now. They voted for the bullying, the racism, and they voted for the very real possibility that a sizable number of Americans will LOSE rights under the most anti-gay Republican platform in history. They may not think they voted for that, and they will kick and scream and cry and say that they are not racist, misogynist, homophobic, or xenophobic. They may not be. They might have voted because they are tired of government corruption, because they want to see veterans get better care, because they don’t think the economy has improved, or because they, for whatever reason, hate Hillary so much that they’d vote for the devil before her, and they did.

Whatever their reasons, they voted for everything we are getting with a Trump presidency. They voted for the discrimination, racism, violence, and hate that people of all colors, sexual orientations, gender, religion, and ethnicities have been subjected to over the last few days because, if it’s okay for the president, it must be okay for them too.

I’m going to leave these two links here for you to read because they say far more than I have the time or the desire to say here in just one blog post. I doubt many Trump voters will though. They wanted to make America great again, but they didn’t see that it already was. Instead, they made America hate again, and that’s…well, deplorable.

An Open Letter to My Friends Who Voted For Trump

This morning I am continuing to spin what I have left of the Romney fleece that I bought several years ago. I honestly cannot remember if it was 2010 or 2011. Yup, that long ago and I still haven’t finished all of it. As I work on that I will be, in spirit, with my brothers who are attending the <a href=”http://www.mensknittingretreat.com/”&gt; Southeast Men’s Knitting Retreat</a> this weekend. Later on I am dropping a couple of boxes off yarn and fiber at the post office, both surprise gifts for their recipients. I have a habit of doing that. It’s just the kind of enabler I am.

Have a great weekend everyone, or at least try to.