Good morning and happy Saturday! I am so looking forward to both the rain and the lower temperatures this weekend. Especially the rain. Some of the recent storms that have come through seem to have missed my house entirely. Wolf Road got a good soaking on Thursday right as I was leaving work, but just two miles away at home everything was bone dry. Not a single drop. Yesterday’s storms, which I had hoped would provide some relief to my poor crunchy lawn, seemed to break up and move to the north and south of Albany and Colonie. My dear spouse keeps insisting we invest in a sprinkler system, but even though I dislike having a brown and crunchy lawn, I also dislike having to mow. It takes too much time away from knitting and spinning.

We are now one full week into the Tour de France and Ravelry’s Tour de Fleece! Today’s stage of the race takes riders on a 184 kilometer trek through southern France from Pau to Bagneres-de-Luchon. For the Tour de Fleece, I will be continuing the second bobbin of my BFL and silk in the Sea Nymph colorway. The first bobbin with roughly half of the fiber was completed a bit sooner than I had initially anticipated, mostly due to the fact that I am not spinning it as fine as I originally intended to. After doing a few self-plied samples in the first few yards of spinning, I decided I wasn’t very happy with how the ultra-thin two ply yarn looked and felt, so I decided to go with just a little heavier weight. 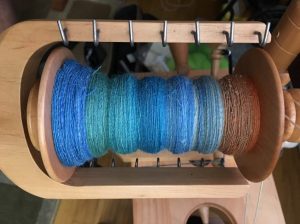 If I can keep the same pace with the merino I also pulled from my stash to spin for the Tour de Fleece, I will be right on track to finish both of them by the time the Tour de France comes to an end. 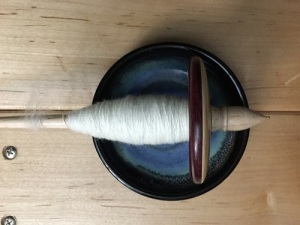 During the evenings this past week I have been working on my supported spindle spinning as part of the Tour de Fleece. This is kind of my ‘personal challenge’ for the Tour. I love supported spindle spinning, and I have several beautiful, well made tools to do it with, along with some absolutely decadent fiber like cashmere, yak, and angora that is perfect for this technique. The trouble is, my supported spindle skills are very rusty because I do so little of this kind of spinning. This is because I fail to follow the advice I give to each and every one of my spinning students. Practice, practice, practice. Practice every day, even if it’s just for 15 to 20 minutes. So for the past seven days in a row, that’s exactly what I have been doing.

It may not look like I have done that much based on what you see on the spindles, but this is the result of about an hour of spinning each night this week. The fiber is cashmere which is not something that holds together very well when it is spun thick. Spinning it thin takes time as it needs a bit more twist for it to hold together, and because I lack the proficiency with supported spindles that I have with suspended spindles, it’s going to take me a while to get through the two ounces of cashmere that I have. Not a problem though. Cashmere is such a luxurious fiber for hand spinners, and I’m enjoying every moment with it.

That’s all for this morning, and now I am off to spin!