Good morning and happy Saturday!
The East Coast Men’s Spring Knitting Retreat is less than two weeks away. This is by far my favorite fiber event of the year and I write about it every year. This year our spring retreat is completely booked. In fact, it sold out on the first day of registration!

For the past several years I have volunteered to lead workshops for guys interested in learning how to spin on a spinning wheel. Myself and other retreat attendees who are also spinners gladly offer up our wheels for the workshop participants to learn on. Many of the guys, myself included, have folding Lendrums that we bring to the retreat which is a fantastic wheel to learn on. Since this event is local for me, I often end up bringing multiple wheels, and now that I have a much smaller car, it can involve multiple trips. It’s a good thing I get such great gas mileage! 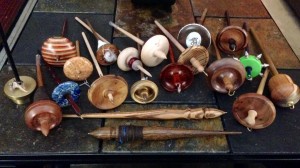 This year I have added a spindle spinning workshop to my retreat itinerary. This is the style of spinning I was introduced to long before I became a wheel spinner, and I struggled with spindle spinning so much that I practically gave up hopes of spinning my own yarn. After I had been spinning on a wheel for some time and developed a little proficiency, I revisited spindle spinning and discovered that I quite liked it. With continued practice that like turned into love, and my collection of spindles began to grow.

In addition to spinning workshops, I also coordinate a couple of between retreat activities for the guys to participate in. The first is the Fiber to Scarf Exchange which I have been doing for several years in a row now. Here’s the premise: Participants must be a spinner. It doesn’t matter if they are a beginner or experienced spinner. Each participant sends me a minimum of 8 ounces of fiber that they would like to see spun up and made into a scarf.

With the help of my cooperative spouse (sometimes grudgingly cooperative) all of the fiber is assigned and sent back to another participant to do the spinning and knitting. Each person participating in the exchange has no clue who has the fiber that they sent in or what they are going to get back, and the participant who receives the fiber doesn’t know whose fiber it is. Each person gets to chose how to spin the fiber they receive and what technique (knit, crochet, woven, etc.) they will use to make a scarf. Part of the rules for this challenge also forbid the participants from posting any public photos of the fiber they received or the project they create, and no one finds out who made what for whom until the next retreat. It’s a lot of fun to put this exchange together and even more fun to see what each of the guys has made.

At last year’s retreat we began the MSKR Color Challenge, a new between retreat activity inspired by the Color Challenge that the Golden Fleece Spinners and Weavers Guild did last year. Participants in the challenge draw 3 to 5 crayons at random and make something with those colors. It can be a knitted, crocheted, woven, or felted item, or even skein of handspun yarn. Part of the challenge is matching the color of their crayons to the yarn or fiber which can be even more challenging for dyers. The other part of the challenge is making those colors, no matter what they are, work together in whatever project they choose to create. Unlike the Fiber to Scarf Exchange, participants are allowed to post publicly about their projects, and I have written about mine here on the blog before. I finally finished knitting my color challenge earlier this week and all that is left is sewing up one seam and blocking it.

I have a few other projects to weave in ends, block, and do some other finishing work on. One of those is the scarf I made for the Fiber to Scarf Exchange. I can’t show you what that is yet, but I can show you a couple of other scarves I made that I need to finish up for our general show and tell at the retreat. These two scarves were made on my rectangular continuous strand loom that I got for my birthday last year. Both were really just practice pieces and experiments with both tension and color changes, but they turned out quite nice so I’m going to bring them for show and tell. With these items finished and out of the way, I can focus on what knitting and spinning projects I want to bring to work on at the retreat.

Later on today I am taking a class in continuous strand weaving at CeCe’s Wool using a small triagular loom. Although I have already done some experimenting with this style of weaving, it has all been on my own so I’m looking forward to this class and getting some proper instruction in the technique.

That’s it for this morning. I am off to weave in ends, block, and make some fringe. Have a great weekend!