Good morning and happy Halloween! Are you ready for the hordes of little beggars tonight? Do you even get many? Here in our neighborhood it depends a lot on the weather, but since we’re in a little pocket with fairly major streets on three sides and never a lot of vehicle traffic, we are also somewhat of a Halloween destination neighborhood. We see many of the same children each year, many from this immediate neighborhood and some whose parents I know. We also see quite a few children who aren’t from this neighborhood, and some I have started to recognize from previous Halloweens. Everyone who comes to the door for candy remarks on the dogs, who are usually in the bay window barking at everyone outside. Halo was only two months old on Halloween last year so I doubt it was much of an event for her then, especially considering the rural neighborhood where her breeder lives. In a way this will be her first Halloween, and I am pretty sure she’s going to insist on answering the door with me all night long.

So, speaking of Halo…I think we can get on with the subject of this week’s blog post.

I knew raising a puppy was going to be a challenge. At 14 months old, Halo is technically not a puppy anymore, but since she hasn’t had her first heat cycle yet (normal for this breed) she’s not quite an adult either. Based on our experience with Soleil, our previous pharaoh hound, and what we hear of the breed from others is that the energy level should pretty high until about age 7 or 8, but the mischief should start to subside about 4 or 5. We have a long road ahead of us and I’m really looking forward to the journey because I love this dog so much. It’s a good thing too, because her antics this past week could test the patience and sanity of most people.

Last Saturday, after getting some spinning and a few chores done in the morning, we went out to run a few errands and do a little shopping. It was a pretty normal Saturday. I needed a couple of light sweaters for work, which I prefer to buy off the rack rather than knit. I also wanted wool, but as you may have noticed, most stores only stock cotton sweaters for men. After some searching, we finally found the wool sweaters I was looking for and two of them came home with me. One slightly more expensive cashmere sweater came home with my dear spouse as one of my Christmas presents.

Once home, I neatly folded the two sweaters I purchased and placed them on the dresser, intending to put them away in the closet once the excitement of us being home had settled. I sat down on the couch for just a few minutes and then realized, Halo wasn’t in the living room. I had forgotten to secure the gate in the bedroom doorway and she was in there, and she was being too quiet. That usually means trouble.

I sprang from the couch and ran down the hall. There she was on the bed with BOTH of the new sweaters I just bought. She looked at me and started to wag her tail. Then I yelled, and she knew she had done something bad. I grabbed both sweaters to see how much damage was done. The purple sweater that I was so looking forward to wearing that afternoon was ruined. Luckily that was the less expensive of the two sweaters, and the green sweater had no doggie damage at all. I quickly put it away as I had intended to do before to protect it from harm.

I took this as a lesson to be more cautious with anything made of wool. Halo has stolen and ruined one skein of yarn back in the spring, and has tried to steal a couple of knitting projects on the needles. She’s always interested when I have fiber out for spinning. I keep my yarn room gated just as we do the other rooms down the hall. The dogs are not often allowed in there and when they are, I make sure they are carefully supervised.

Last night I was sorting laundry (typical Friday night here) making piles of clothes in the bedroom to be taken downstairs to the laundry room. At the bottom of one of those piles was a few pairs of hand knit socks. I purposely put them at the bottom to keep them out of Halo’s sight. The naughty little girl loves to steal all kinds of socks, and I knew the wool would be extra tempting for her. I thought my hand knit socks were safe. I was wrong.

She’s a sneaky girl when she wants to be, and I never saw her near the pile with the socks. But there she was on the bed and what I thought was one of her chew toys, which she often plays with on the bed while I’m sorting laundry, was one of my favorite socks. Like the sweater, it’s ruined. I don’t think there is any amount of darning skills that can resurrect this poor sock. 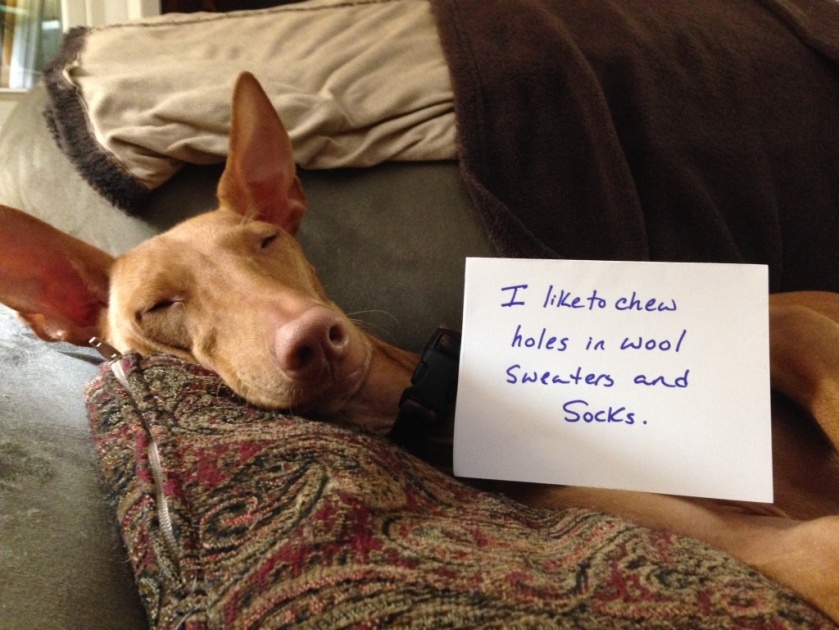 Another lesson learned. Halo is not to be trusted. Ever. Sorting laundry for the wash or folding it and putting it away can no longer be a spectator activity for her.

I’m no stranger to puppy mischief or to having my knitting stolen. When Flash first came to us he was just under a year old. For the first year or two, I learned many hard lessons about protecting my knitting. He had a thing for hand knit socks too, but his preference was socks still on the needles. There was never a sock ruined so badly that it could be fixed. They just required re-knitting, but it seemed like at least once a month I was replacing my sock needles. Flash will be 10 in April, and he’s mellowed considerably over the years.

Monticello seems to be the best behaved dog in the house. He has never shown any interest in my knitting, except maybe when a project is large enough for him to curl up under in my lap. He loves to try and crawl inside my sweaters with me. He barely pays any attention to my spinning fiber either, but when a bag of unwashed fleece comes into the house, the barnyard smells become irresistible to him. 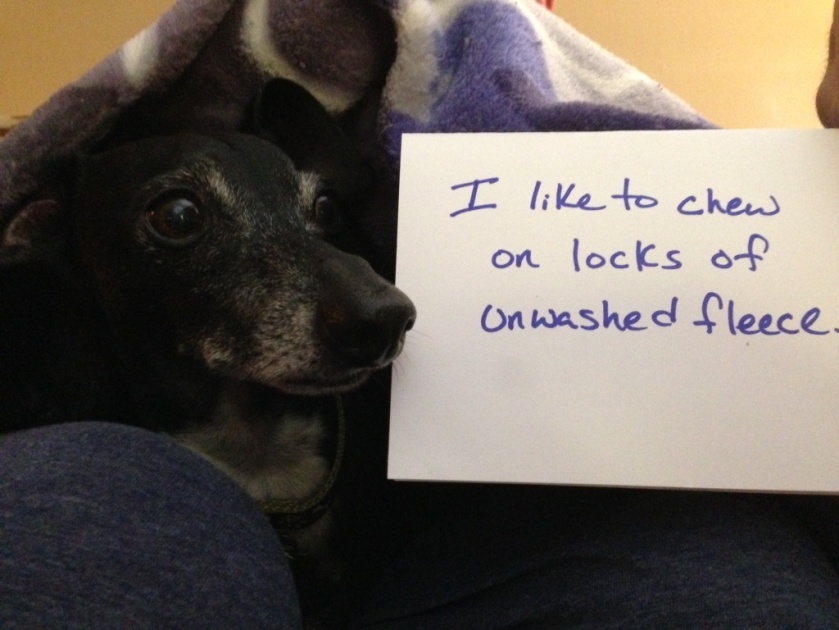 Life with dogs can be a challenge, but I am absolutely 100% a dog person and I can’t imagine not having them in the house, so it’s a challenge I willingly accept. They are going to occasionally ruin stuff, but it’s just stuff, and stuff can be replaced. The older I get the more I mellow. There is not much that truly angers me anymore, and getting angry at the dogs is pointless. Instead, I look at life with dogs as a lesson in how to be a better human.

That’s all I have for this morning. I’m off to do a little spinning, a little laundry (alone!), and then we’re off for another typical Saturday of errands and shopping. Tonight is likely to be anything but typical. Oh, and about that ruined sweater…I cut it up into pieces and took the opportunity to do the same with an old sweater that was destined for donation. Now I have some pieces of really nice wool fabric to use for sewing projects!