Good morning, and happy Saturday! Did you survive Rhinebeck last weekend? I swear every year it’s busier than the year before. Saturday, which is always the craziest of the two days, was the worst I have ever seen, and I spent most of my day working in a booth. Queues started forming at all of the usual vendors for their door buster specials as soon as the gates opened. There seems to be such a Black Friday mentality with folks arriving hours before the gates open just to be the first on the grounds, then making a mad dash to their favorite vendor’s booth. I just don’t get it.

I did get to spend lunchtime on the hill during the Ravelry meet-up with a group of guys from the Men’s Spring Knitting Retreat, and the late afternoon browsing the barns with my weekend houseguests. Usually by late afternoon on Saturday the crowds have started to thin out making it a little easier to get around, but if they had indeed thinned out it was only to the “normal” Saturday level of craziness. I stopped in to say hi to several friends who vend at Rhinebeck and scoped out a few others that I wanted to try and revisit on Sunday when it’s usually not so mobbed, but Sunday at Rhinebeck, which is always busy but not quite the mob scene that Saturday is, seemed more like a typical Saturday from past years.

Most of my day on Sunday was spent participating in the sheep to shawl competition. If you’re not familiar with this, here’s how it works. Spinners start with washed locks and do their own carding to spin the weft for a weaver to weave with on a pre-warped loom. There are time requirements to get the shawl on the loom completed, as well as length and width requirements for the shawl. Each time consists of a weaver and four spinners. One of those spinners usually stops periodically to collect bobbins from the other spinners and wind their yarn onto weaving bobbins for the weaver. 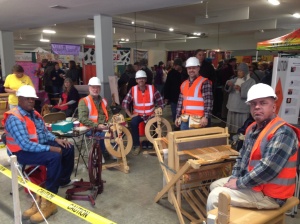 For this competition the sheep has already been sheared and the fleece has been washed. There are variations where the sheep is sheared right at the start of the competition. The washing step gets skipped as that can consume an entire day or more waiting for the fleece to dry, and the spinners will usually spin the wool in the grease as it comes off the sheep. In other variations, the shawl is knit or crocheted instead of woven.

We had three hours to spin and weave a shawl that was a minimum of 18 inches wide and 72 inches long. I had been through a dry run of the process at the Washington County Fair with Dave, our team leader, and Rob, our weaver. We were missing two of our spinners that day, but it was good to at least get an overview of how the whole thing worked. We also didn’t have our team’s theme finalized then, and I have to say, we all looked pretty awesome at that competition at Rhinebeck!

Dave, our team leader, put a lot of effort and expense into our “Men at Work” theme and it shows. Some folks in the crowd actually thought we were five construction workers who spin and weave as a hobby. Some jokingly asked if we were going to sing Y.M.C.A., completely overlooking that several of that group’s ensemble were missing. There were even a few women who remarked that it was just so amazing to them that men were actually doing this, as if the possession of a penis somehow meant that we couldn’t (or shouldn’t?) spin and weave. It wasn’t done in a condescending manner at all, but did clearly show that even some women (especially of a certain generation) can have some of the same gender based stereotypes as some men.

Some folks did get the “Men at Work” reference when they saw this on our team’s display board.

We had a great fun spinning and weaving, and even more fun talking to folks who came in to watch. In many ways it was as much of a public performance and demonstration as it was a competition. We worked very efficiently and very well together, and first of the teams to get our shawl off the loom. In the end, once all the shawls were completed and the judging done, we took fourth place which, for our first time out as a team, we are all very proud of. 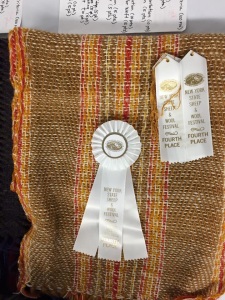 Since the competition took up much of my day in Sunday, I had just a few hours of shopping in the afternoon. That was okay though, because I rarely go to Rhinebeck for yarn or fiber anymore. Of course, some yarn or fiber inevitably comes home with me, but my primary focus was books and tools.

I was unable to find a couple of very specific weaving books that are on my wishlist, but I did manage to find the Schacht inkle loom I have been longing for. I also wanted to get a new spindle, and that actually turned into two new spindles, a tiny half ounce cherry burl spindle from Dan Tracy Designs, and a larger spindle, weighing only .7 ounces, from True Creations. I rounded out my tool purchases with some beautifully dyed Finn from Gnomespun , boot socks from my friends Denise and John at Ideuma Creek Alpacas, and the most awesomely scented soaps from my friend Eileen at Weston Hill Farm. 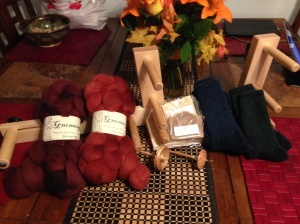 I didn’t break the bank this weekend and I proved that I actually can be trusted with a credit card at a fiber festival. Most of all, I had fun, and that’s what Rhinebeck is all about. I’d love to hear what your Rhinebeck experience was like this year.
That’s it for me this morning. I have yard work to catch up on and some errands to run this morning. Later this afternoon, we’re taking the dogs to the park for a photo session with a friend, and getting some professional family pictures done.