Good morning, and happy Saturday! Take advantage of today while you can, because the next few days look considerably cooler and very wet. Not that I’m complaining. We really need the rain. I don’t think I’ve ever seen my lawn so brown and crunchy, even in the middle of summer.

Last week I promised to have more to say about the Bliss wheel. Let’s start with a little recap of how it came to me.

Two years ago in May, just before the Men’s Spring Knitting Retreat, my Bliss wheel by Woolmakers arrived. This spinning wheel, made for Woolmakers by Louet, was one of the first ten off the line and Woolmakers was giving them away to spinners who agreed to evaluate and review the wheels. I was one of those lucky spinners. 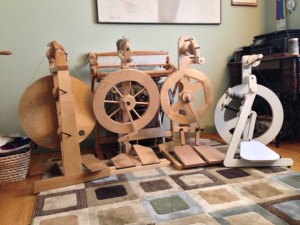 When the Bliss wheel came to me it was my fourth spinning wheel and my dear spouse joked at the time that if I brought any more home he would call the producers of the TV show Hoarders to do an episode about me. A year later wheels number five and six came into the house, and I still haven’t seen a TV crew here.

At the time I wrote my one year follow up post, I had decided that one day, when the Bliss wheel came back from its tour of Long Island with my friend Lars, that I would pass the wheel on as a gift to someone just as Woolmakers had gifted it to me.

At the Men’s Spring Knitting Retreat in 2014, I met that spinner. Actually, Roy wasn’t exactly a spinner yet, but he must have been one in a previous life. He spun his first yarn at that retreat and it looked like a yarn spun by someone with much more experience. Roy enjoyed spinning too, but lacked the budget for a spinning wheel, and that’s when I got my idea. 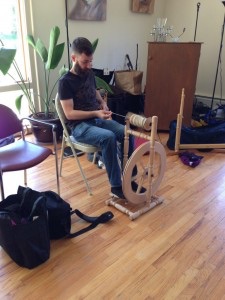 I was happy to hear that Roy was coming back to the Spring retreat this year, as was Lars, who had been test driving the Bliss since the year before. Lars brought the Bliss to the retreat with him and I put the wheel in front of Roy and asked him to try it out. I then told him that if he liked it, he could take it home. Throughout the weekend a few people, curious about the unique style of the Bliss, would ask who’s wheel it was, and Roy beamed and proudly proclaimed that it was his. (my apologies for neglecting to get a picture of a happy Roy with his new wheel)

Roy was thrilled, and so was I, and now there’s really no doubt at all why people call me an enabler.

I’m off to spin now. I’m still working on the gradient that I carded for the Fancy Kitty Ravelry group challenge. I’ll have more about that next week. Have a great weekend everyone!