Good morning, and happy Saturday! It looks like it may be a bit wet out there today, which means it’s a perfect day to stay inside and get caught up on some of the projects I set aside during the Tour de Fleece. I fell short of spinning all of the fiber that I pulled out of my stash for the tour, but having completed just over 1.5 pounds, I’d say I still did pretty well. I spun every day that the cyclists in the Tour de France rode, and only took advantage of one of the rest days. The end results of my plying last weekend are over 1000 yards of various two and three ply yarns that I am incredibly pleased with. 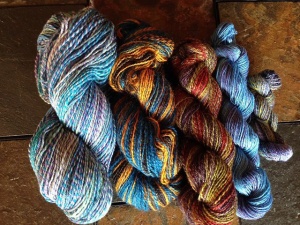 Each of the fibers I spun is distinctly different, as are each of the yarns that they became. There isn’t one that I could single out as a favorite. They each offered their own unique and enjoyable experience between drafting methods and the tools used to make them. So although I didn’t get through all of the fiber I originally intended to, I did meet my goal of spinning a variety of fiber and preparation types, drafting styles, and on a variety of tools.

After the Tour de Fleece I took a couple of days to rest before sitting down at the wheel again, and when I did, it was for another challenge – the Iron Spinner Competition sponsored by the Golden Fleece Spinners and Weavers Guild at the Schoharie Sunshine Fair in Cobleskill. This year’s competition was the same as last year as far as how much plain white fiber each participant received, the pantry table of other ingredients and embellishments, and the time frame we were given to create our yarns.

I brought the same wheel, same attachments, and same tools with me as last year. I had some idea of what I wanted to try to create this year, and made sure to arrive early to give myself time to study the pantry table and see what was available to work with and try to develop a plan. But with no guarantee that I’d be able to get the ingredients and embellishments from the pantry table, I had to keep an open mind and stay prepared to wing it once the competition started.

Lucky for me, I was able to get the one pantry item, a cone of pale green 2 ply wool, that I knew I would need to start with before I could do anything else. I have always wanted to do a corespun yarn and I’ve read about how they’re constructed and have watched them being made, but my attempts at creating them have always been epic failures. Success was going to depend heavily on preparation of the elements making up the yarn, which would reduce the amount of time I’d have available to actually spin it, so I had to work fast.

I knew I needed to take twist out of the core yarn, so I ran the 2ply through my wheel in the opposite direction of its ply twist and onto a bobbin. I took out as much twist as I possibly could and I think the plies even started to twist back in the opposite direction just a little.
Once I thought I had enough of my core yarn on a bobbin, I took my two ounces of base fiber over to the pantry table, split it up roughly in half, put some through my drum carder, and then added in some different colors of green, blue, and purple wool/mohair/silk blends, and some sparkly gold Angelina fiber. I layered these ingredients onto my drum carder as best and as quickly as I could and created two very unique and beautiful art batts that I then pulled out into a roving. I met my two ingredient minimum with the items that I worked into my base fiber on my drum carder, but I knew that wasn’t going to be enough. I needed something else to make it really stand out, so I chose a small spool of gold thread from the pantry to use as a wrap.

I sat down at my wheel and began working on creating my corespun yarn. I wanted texture, which was a good thing, because the unevenness of the elements in the roving that I had created made wrapping the fibers around the core almost impossible at times. The corespun was thick and thin and the gold thread wrapping around the yarn as it was fed onto the bobbin had spots where it was tightly wrapped and loosely wrapped. All of these elements came together beautifully, and as I saw the yarn building up on the bobbin, I was thrilled with how it looked. 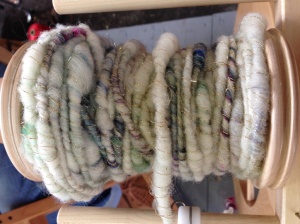 The actual spinning went pretty quick, and I finished a full 30 minutes before anyone else. Had I know that was going to happen, I might have spent a little more time on the preparation of my fiber to make it easier to work with, and maybe a little less chunky. The final yarn also had a little too much twist in it, meaning that I could have spent a little more time taking twist out of my core too. Remember, this is something that I have never successfully executed before, but it was my best attempt yet, so I completed my skein, filled out my tag, and laid it out on the table before the judges.

I was truly amazed at the results of my efforts. I thought that being the first to finish was not a good sign but it looks like all that preparation really paid off.
This competition really isn’t about winning or losing, and I know that might sound a bit hollow coming from the winner, but it’s true. It really is about having fun and testing your abilities as a spinner and being willing to try things that you might never have done before. Most of all, it’s about having fun, which everyone who participated certainly did.

So now it’s time for me to start doing something here this morning. I want to resume spinning Aslan on my Cardarelle, but before I can do that I need to card up some more fiber. I also need to get my Tour de Fleece yarns into a bath of warm water. I think I’ll start that first and let them soak while I do my carding. Spinning will happen today, but that preparation must always come first.