Good morning everyone, and happy Saturday! I hope you are all having a great holiday weekend. We spent last night inside watching TV trying to drown out the noise of the fireworks outside because they make one of our dogs very nervous. I was hoping the hot weather we’ve been having would continue through the weekend so we could keep the air conditioners running and have the extra noise to help, but it turns out they weren’t needed. However, it cooled off quite nicely last night so we didn’t mind shutting the doors and windows for a while until the revelers ran out of explosives to set off.

The Tour de France kicks off today, which means it’s time to start my fiber that I have pulled from my stash for the Tour de Fleece. The polwarth fiber in the Caribe colorway I ordered from Susan’s Spinning Bunny arrived earlier this week and as I expected, it’s more beautiful in person than it is in pictures, and I was tempted to start spinning it as soon as it arrived.

I am sure many of my teammates are going to be kicking off the tour with their Caribe, but I’ve decided to start with the Wensleydale fiber on my Hilltopper wheel this morning, and there are a couple of reasons for that decision. First, it’s been ages since I have spun a project on my Hilltopper wheel and I have really been looking forward to it. Having multiple wheels in the house doesn’t mean I keep spinning projects on different wheels at the same time. I have done that, and I am actually doing that now by setting aside the spinning project on the Cardarelle during the tour, but most of the time I only work on one wheel spinning project at a time.

The second reason I chose to work on my Hilltoper is that I had to clear out space in my craft room and turn it into sleeping quarters for our friend Dave for the weekend. In order to make space for a twin bed, I moved my Edammertje wheel and my great wheel downstairs, and piled a bunch of stuff into the closet in that room. Because my Lendrum takes up so much less space folded up and packed in its bag, I decided to store that in the closet for the next few days that Dave is here. With the Cardarelle sitting in the corner dedicated to the llama project, and my Bliss wheel still with my friend Lars on Long Island, the only wheel left in the room was my Hilltopper. I think it was just meant to be.

I spent some time yesterday afternoon with my Hilltopper giving it a little tune up before starting my spinning project this morning. The flyer and bobbin were removed and the shaft cleaned and lubricated, drive wheel and flyer bearings were given a few drops of oil, and the drive band replaced. I have been using a linen/cotton blend yarn as the drive band on this wheel, but the blue crochet cotton I picked up some time ago has worked well on the Cardarelle so I decided to give it a try on the Hilltopper too. So far I am very pleased, and I like the little pop of color it provides. I may have to get some more in a bright green. 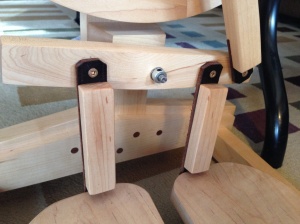 As I started to spin with some practice fiber, I immediately noticed a familiar quacking sound coming from the treadles and knew there were a few more spots that needed attention with the oil bottle. The leather pieces that connect the treadles to the footman, and the footman to the drive wheel can get a little noisy when they are not kept properly lubricated. Once those spots and the metal treadle hinges had their little drink, my Hilltopper was spinning smoothly, effortlessly, and quietly as it should. 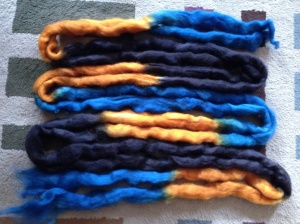 I spent some time with the Wensleydale fiber yesterday too, trying to work out how I wanted to spin it. I undid both of the four ounce braids and laid them next to each other. I was pleased to see that the color repeats on both lengths of fiber were identical, so I decided to do these as a two ply. Despite another late night last night, I woke up a little earlier than usual this morning, and I have already been working on it. I woke up Dave too, when I entered his room to get my wheel, my stool, and my fiber, but he quickly went back to sleep.

So, here I am in a house full of guests, my spouse, and our dogs, enjoying the early hours of the morning as I do every Saturday, spinning happily away. Meanwhile, across the pond, teams of cyclists are starting their trek for the Tour de France, and spinners worldwide are doing exactly what I am doing here as part of their teams for the Tour de Fleece, and I wish them all the best.