Good morning, and happy Saturday! It’s going to be a gorgeous weekend, and I’m looking forward to spending as much time outside as possible. There are some outside chores to be done, which I will try to get done as early as possible. One of those chores is mowing, which there’s mysteriously less to do because someone mowed my front yard yesterday while I was at work. I am fairly certain it was my neighbor’s lawn guy. The mystery is why.

I have to be extra quiet this morning while I work. My mother in law is visiting for a couple of weeks and is staying in the guest room which is adjacent to my craft room. She’s not as much of a morning person as I am, and we were all up fairly late last night, so I will let her sleep in as long as she wants.

This morning I am going to continue spinning Aslan on the Cardarelle. The first bobbin is filled, so I will start on the second. I am really pleased with how well this little wheel spins, and I am really enjoying this fiber! The fiber still has a few bits of straw and other vegetable matter in it, even after washing and being run through the drum carder. I don’t mind though. Those bits come right to the surface as the twist enters the fibers, making the bits of stuff easy to pluck right out. However, with the next batch, I will spend the extra time picking as much of the vegetable matter out as I can before I wash it.

This is my first year participating in the Tour de Fleece, and I am a co-captain for Team Spinning Bunny, headed up by my dear friend Susan of Susan’s Spinning Bunny. Our team has few rules, but our requirements for team membership are to either spin fiber from Susan’s shop, or spin on one of Jim’s spindles or wheels, or both. I have plenty of fiber from Susan, mostly from this year’s Fondle This fiber club, as well as a few of Jim’s gorgeous spindles, and even my trusty Hilltopper spinning wheel, so I have my membership requirements pretty well covered.

Earlier this week, I spent some time digging through my fiber stash to see what I would like to spin for the Tour de Fleece. I didn’t want to set too lofty a goal for the amount of fiber that I wanted to tackle, but after I pulled everything together, I think I might have bitten off more than I can chew (or spin).

Here is what I have planned.

Spinning Bunny fiber to be spun on my Lendrum: 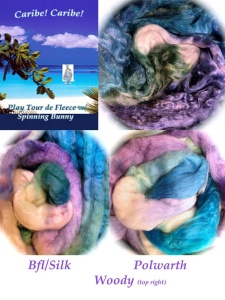 Eight ounces of Polwarth in Caribe, a colorway made specifically for this year’s TDF.

Non Spinning Bunny Fiber to be spun on my Hilltopper wheel made by Jim:

Eight ounces of Wensleydale from Gnomespun in a colorway called Anubis.

Non Spinning Bunny Fiber to be spun on my top whorl drop spindles made by Jim:

Four ounces of mixed BFL from the Lady Llama Fiber Company in a colorway called Basket of Peppers.

Non Spinning Bunny Fiber to be spun on my Russian spindle made by Jim: 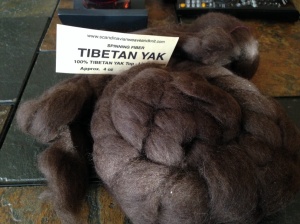 The remains of four ounces of Tibetan yak

Yes, all that in a month. That’s my goal anyway. It will make a small dent in my fiber stash, which basically means I will have space to fill with new fiber.

Spinning up the fiber that I set aside for my Lendrum and Hilltopper should go pretty easily. I purposely chose smaller amounts of fiber for spindle spinning since I am still nowhere near as proficient with spindles as I am with a wheel. My main challenge for the days that the cyclists are doing their challenges is to work on my Russian spindle technique. I practiced with it for a few weeks after Christmas, but in the last several months it has been sitting on a shelf while I have been working on other things.

That’s it for now. I am off to spin. Have a great weekend!