Good morning, and happy Saturday! Happy Solstice too! Summer is now officially here and along with that comes the kind of weather that makes handling wool in any form, whether spinning or knitting, a bit uncomfortable. Not this morning though. The last couple of nights have been so pleasantly cool and we’ve really enjoyed having all of the window open all night. Except for Thursday night, when a little black and white critter decided to pass through the yard. Lucky for us no dogs were outside at the time, but the fans that bought the cool air in from outside and circulated it through the house also brought the smell in too. I swear I could still smell it when I woke up the next morning.
This morning I’m thinking about two very special llamas at Wunsapana Farm . Every llama at Wunsapana Farm is special, but these two are just a little extra special to me.

The first is Stella, who was my first experience with llama fiber. Teri told me that it probably wasn’t very good fiber, but I didn’t know good llama fiber from bad, and I was in love with Stella, so to me it was very good fiber. I spun some up for Teri shortly after that visit, and carded most of the rest with wool. There’s still a bit left to be carded, and then comes the spinning, which I’m really looking forward to.

When our group from the Men’s Spring Knitting Retreat visited last month, Teri broke the news to me that Stella had passed on the day before. I knew the time would come, and hearing it made me sad, but I felt very grateful to have been able to meet Stella and to have even gotten the opportunity to walk her once, and very honored to have her be my first experience with llama fiber.

The other very special llama is Aslan. Born on the farm two years ago, he’s the one that everyone has their eye on these days, even me. He’s tall, dark, and handsome, and a bit mischievous too. I jokingly refer to him as my llama boyfriend because he seems to take an interest in me whenever I visit, and I just think he’s stunning. We’ve had one opportunity to walk together so far and I’m hoping we’ll get the chance to do it again soon.

Aslan had just been shorn not long before our group from the Men’s Spring Knitting Retreat came to visit. His fleece was spread out on a skirting table for us all to look at and fondle during our visit. It is really spectacular stuff. It’s so silky soft and smooth, and even the guard hairs which are normally much heavier and coarser than the downy undercoat, are soft and silky too. 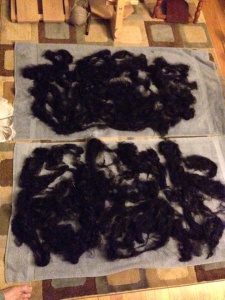 It’s also an absolute joy to spin. I was thrilled to be able to take his fleece home with me that day. I’ve only washed a little bit of it so far, and I’m slowly working on spinning up a skein of yarn to return to Teri. Spinning it has been a bit of a challenge because I’m not used to working with something so slick, and because I haven’t had much time for spinning lately. Getting good pictures of Aslan’s fine dark fiber is a bit challenging too. So perhaps I’ll hold off on trying to get any further pictures until the first skein is finished, which means it’s now time for me to get spinning.