Good morning everyone, and happy Saturday! Isn’t it great to finally have this weather? It’s certainly much nicer than last Saturday. But last weekend did get better and Memorial Day was really quite spectacular. My pool was still too cold to use though. The water temperature was about 58/59 degrees and I was only brave enough to dip my feet in, but not for very long. After a week of perfect summer temperatures (and a solar cover) the water is now above 70 so last night I went for an official first swim of the season.

Last weekend I started spinning some beautiful fiery orange Finn top on my Bliss wheel. During the past week I only managed to get about one third of the fiber spun. Because the highest ratio (18.5:1) on the Bliss is a little harder to treadle, I’m sacrificing twist speed for treadling ease and using the 12:1 ratio. The singles are coming out pretty fine so I’m expecting at a 3 ply this will be fingering/sock weight yarn.

The more I spin on the Bliss the more I like it, and I’m not just saying that because the company gave me the wheel. It’s light and easily portable despite the fact that it doesn’t fold. I brought it to Wednesday night knitting and spinning at a friend’s house with some of my practice fiber to let everyone try it out. Unfortunately that whopper of a thunder storm hit and the power went out so it was a little too dark most of the evening for too much spinning or knitting. We’ll have to try again next week.

Prior to the Men’s Knitting Retreat I had to empty out my little yarn room to turn it into a bedroom to accommodate a couple of my houseguests. After the retreat I worked on putting it back together and rearranging things within that space in a way that works better for me. I was worried that four spinning wheels would be too much for such a tiny little room but so far it’s working. My Edammertje is now my official student/loaner wheel and I’m expecting that to go out on loan very soon which will free up some more space. My primary spinning chair is now on the correct side of the window to allow more of the natural light on my right side which is much more helpful since this is the side of my I draft out to most. What a huge different that has made!

Off in the other corner is my rigid heddle loom that is always out even though it’s not always in use. Since it folds up and stores away easily, I’m going to have to do that. I recently acquired a small floor loom that I’m pretty sure I can fit in this space where my rigid heddle loom and drum carder sit, along with some creative rearranging of other things. That loom is a project though. It needs new heddles and reeds, and possibly some new front and rear aprons, a few new nuts and bolts, and some all around TLC. While I work on that I’ll stock up on some of the other things I’ll need like shuttles and bobbins plus a few other accessories, and then I should be good to go. 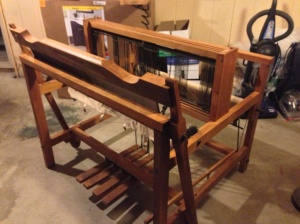 Like I said, that loom is going to be a bit of a project, but one that I’m really looking forward to. I’ll have more to write about that as I work on it. Until then, I’ve got some spinning to catch up on before heading out to do a few errands later this morning. After that, I don’t plan on moving very far from a chair in the sun in the back yard.
Have a great weekend everyone!

One thought on “Saturday morning spinning in better light”