I did something on Saturday that I almost feel just a bit guilty about since I like to consider myself a big advocate for supporting local yarn shops, farms, and fiber artists. I went to WEBS Yup, “America’s Yarn Store” the big yarn mecca with the super sales and endless selection of yarns. Some may know them only from ordering online, but their store in western Massachusetts is just as big, well stocked, and busy as you might have heard. 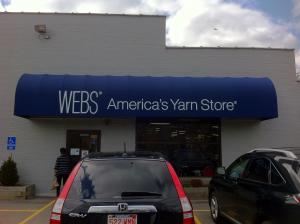 I had never been to WEBS before, and so many people look at me in disbelief and amazement when I say that, as if it’s practically impossible to live just an hour and a half away and to have never set foot in the place. It wasn’t just a matter of being out in the Berkshires and just stopping in because it was close. WEBS was the destination for the day. My friend Dave was visiting from Montreal for the weekend and he had never been to WEBS before either, so we planned the trip.

I have heard friends say they have almost gone broke shopping at WEBS, or easily could, just from buying yarn. I didn’t get that feeling at all. It was sure fun to stick my hands in every bin and fondle every yarn, which is why I didn’t get any other pictures after I walked in the door. I wasn’t in the market for yarn though, at least not for knitting. I seem to have been shopping more as a spinner and weaver, and their selection of weaving yarns, spinning fibers, and related tools is equally impressive as their knitting yarns and supplies. Between David and me drooling over the looms, it was probably a good thing we took his car instead of my truck, or someone’s credit card would have gotten a serious workout.

I get the impression from Dave that outside of a handful of yarn shops, there’s not much in or around Montreal for other fiber crafts, so it was a good weekend of fiber retail therapy for both of us, which included stops at LOCAL shops too. Will I ever go back to WEBS? I’m sure at some point I will. Maybe I’ll make it an annual trip like Rhinebeck. But until then, there are local shops where I can get anything I need. The drive is so much shorter and the faces are much more familiar. I like that!

Have a great weekend everyone, and ENJOY the weather!